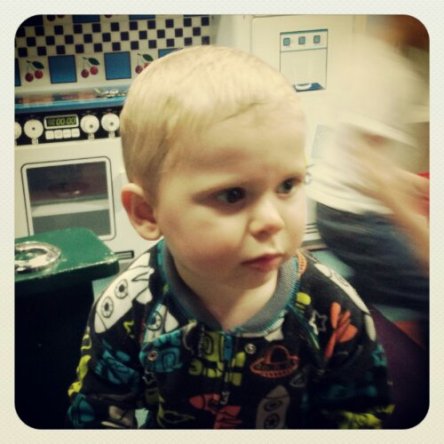 There are weeks where motherhood feels like it might kill me. I have been up at 4am this week with a fussy kiddo, and it turns out that it wasn’t just teething. Mother’s intuition wins again as I had to go round and round with Boof to convince him that Potamus was sick and it wasn’t just teething and that I wasn’t just trying to take a day off from work because of anxiety. Turns out he has a double ear infection and some sort of trouble breathing requiring a 1 dose steroid and an albuterol inhaler at night. And, because he’s had so many ear infections in his short life, we’re having him on a stronger antibiotic. Awesome.

Friday rolls around and I decide to get Mr. Fussy-pants out of the house, because I was going insane and he is way better when he can be distracted by shiny things. So we headed off to our rainy-day playground KidsQuest, and  I thought nothing of him occassionally coughing and sneezing in the backseat.

But yeah, let’s talk about how fun it is to clean up yogurt cracker snot barf…especially when it is pouring and I’m bent over the carseat with my buttcrack hanging out for all the world to see. Thankfully I had packed some extra pj’s, otherwise we’d have to have run naked baby into Target to get some replacement clothes. And I just didn’t want to deal with THAT humiliation. And yes I am the terrible mom who still brought her kid to the playground because he was feeling much better after the whole barfing incident. And, turns out, amoxicillian used to give me bouts of vomiting and diarrhea, too, so my parents think that he’s not sick…though he barfed and crapped through his jammies later in the day, and my hands and hair cannot quite get the smell of barf out.

So there were ups and downs and he went down for bed at 5:30pm and slept solidly until 11…not a norm for this week, so I’m hoping that he’s on the mend. And thankfully my parents are in town, so I get to sleep in…otherwise I might have spent the weekend crying into a bottle of wine…