We owe it to our children to be better stewards of the environment. The alternative? – a world without whales. It’s too terrible to imagine. Pierce Brosnan

Yesterday Potamus and I went on a pilgrimmage to see the beached whale that washed ashore on our hometown beach. I’m not sure why I felt compelled…was it because it was local? Because I heard stories of people from all around the area who made the trip and I thought, “why not me?” Was it to confront my fear of whales in the water head on? Was it to confront my fear of dead animals head on? Was it because I wanted to pay my respects to a creature whose life ended too soon by careless humanity? Was it to teach Potamus about being a “good steward” of the land and the circle of life?

Or, was it because a horrific scene was unfolding across the country and I was powerless to do anything about it? Because, as I drove down to the beach amidst the crowd, I felt like, in some small way, honoring this dead whale was paying tribute to all the life lost at the hands of careless and stupid and maybe-even-evil humanity.

And seeing the tail ripped jaggedly off it’s body, I thought of the marathon amputees splashed across the news. And the deep cuts in the whale’s side, like the shrapnel wounds from those two explosions. Maybe it’s wrong to compare an animal to the human lives that were lost or injured yesterday, but also…maybe not.

As I waded into the water and bore witness to the destruction of this endangered animal, I said silent prayers for those in Boston. I couldn’t show up to the marathon finish line, but I could show up at the beach in my hometown, and grieve for all that is sad and wrong with this world. And I stood with respectful bystanders: mothers and fathers sharing this animal’s death with their children, photographers looking for a good picture to display in their newspaper, security officers to protect the body from being desecrated, and First Nation indiviudals who seemed to be there for a witness of what we’ve done to their land and the spirit of the people (or maybe I’m reading WAY more into all of this?).

I felt like a part of my community as we mourned. And my prayers go out to those in Boston, and around the world, who are having to deal with sadness and death and destruction. 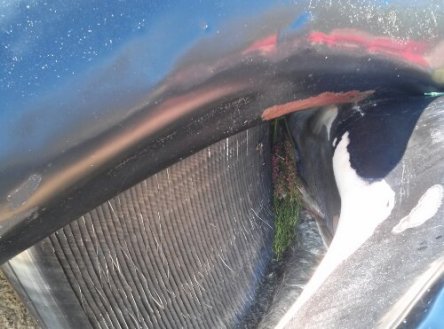