My work had come to a close and I was waiting. Waiting. 11 days of practice contractions and then, on Monday December 19, I felt sick. Not so sick that I couldn’t do anything, but I figured it was better to rest anyway. So I holed myself up in my bedroom and slept. The December weather was nice for that type of hunkering down. Hungry, at 9pm, Boof handed me my requested Dairy Queen mint m&m blizzard, and left me to sleep.

Around 12:30am my contractions began coming more strongly, though I was sure it was just another one of those nights, where the sleep would be little, but the baby would stay nestled inside. We were early by a few days, so I figured I couldn’t complain THAT much. After I got up to pee (yet AGAIN), I thought for sure my water had broken and I woke Boof up. We called the midwife and she wasn’t quite sure if it had based on my descriptions, but since I had been 4-5 centimeters in the past appointment, she thought it’d be okay if I came in.

We got to the hospital by 2:30. The walk into triage became increasingly difficult, and I had to hold onto the railings. The midwife, haggard from working with SIX patients that night, wasn’t quite sure I needed to be admitted (as she checked, I hadn’t had my water broken), but because I was past 6 centimeters, and clearly in pain they found me my room.

Boof said it went fast. But it could have taken days for all I know. In hindsight I realize that the reason it was so hard was because it was so fast and that I really didn’t have time to catch my breath. I was in my room by 3:30, tried to get in the miniscule bathtub while Boof rushed to the car to get our stuff. I thought I was going to die. Monkey mind became manic monkey mind, and I began panicking. I said all sorts of nonsense things, and my mind whirled and gnashed its teeth. The only saving grace was the firm, but loving, coaching by the labor & delivery nurse Julie. Boof rubbed my back and I swayed. I bounced on the ball and thought it would rip me in half. I tried squatting and almost toppled over. I ended up on my back, in the bed, curled up wishing to die.

At one point I asked for the epidural. I wanted it badly. I could not stop the anxiety and fear and panic and pain, and was shutting down in my ability to concentrate. My midwife suggested fentanyl if I really wanted meds, and the clarity that provided was immense. I went from a 10 to a 7 in a matter of a few seconds, which provided a few minutes of relief before I pushed.

That whole labor part…well, I got the fentanyl at 6:00 am and Potamus was born at 6:29. If they had known I was that close they wouldn’t have given me the meds. If I had known I was that close, perhaps I could have held off a little while longer. But it was amazing…a spiritual experience in a very hippie dippie way. Like a glass of wine during dinner, it took the edge off momentarily. As soon as I started pushing I was back at a 10, feeling like my insides were going to come exploding out, but for those few minutes where I was able to breathe through the contractions, hear my monkey mind fade into focus, it was powerful.

Dilated to a 10, my midwife told me that my water was still intact. I felt the urge to push, and while I was on my back, I bore down and BAM or POP it went. It honestly felt like a water balloon shooting out of my crotch. That happened at 6:27 am. 3 hours after I had been admitted into my room. The midwife hadn’t even put her other glove on yet, when she looked down and said “he’s crowning. reach down and feel him, he’s right there.”

Three pushes, and two minutes after my water had broken, Potamus was here, in the world, snuggled up on my chest. Love, like I’ve never felt before. 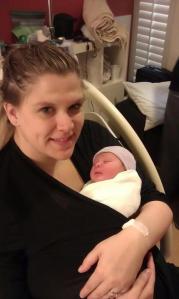