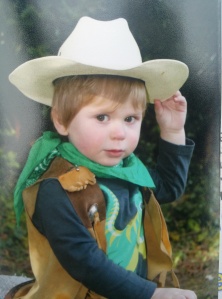 I hitched Potamus onto one hip and entered the door code early yesterday morning. We were running late because of the rain and traffic, and Potamus was dawdling in the parking lot wanting “up, up!” instead of splashing through the puddles like he normally does. I set him on the counter inside, signed him in, and was cheerfully accosted by the daycare director holding out a packet from Lil’ Buckaroos photography.

I had seen the signs for the past few weeks, about the pony ride and pictures happening, but assumed it was something that parents had to opt in to participate. Not needing pony pictures with my kidlet, I just ignored all the paperwork. But there it was, in my hand, 7 prints, of my son on the back of a pony, dressed in cowboy gear, and the instructions to pay $25 within a week, order prints online, or return the proofs to the office.

How could I return such adorably overpriced western posed pictures with my one and only? He looked so cute perched on Dakota the pony, tipping his hat, and staring moodily into the camera. I’m a sucker for photos, anyway, and so I ponied up (pun intended) the $25 to pay for the proofs. I won’t even go online to see the package options, because I might end up spending his entire college fund on pony pictures.

But it made me laugh, because it was the best marketing strategy ever. How many parents are going to return the already printed photos of their adorable children riding ponies? I’m guessing not many. The strategy worked, though if it had been something else besides pony pictures, I might have been legitamtely mad. Or if I had an aversion to ponies and felt like I should have been given the option to give permission for my son to ride atop those sometimes vicious little creatures.

I came home and showed Boof the pictures, and he agreed they were cute. Though his heartstrings are not tugged nearly as much as mine, though he loved the idea of giving one of them to his dad for Father’s Day, because Potamus is in love with his “Buppa” and they do manly cowboy things together, like tromp through yard with tools, and I think he’ll love the picture. And who wouldn’t, because my child is adorable, ammirite?