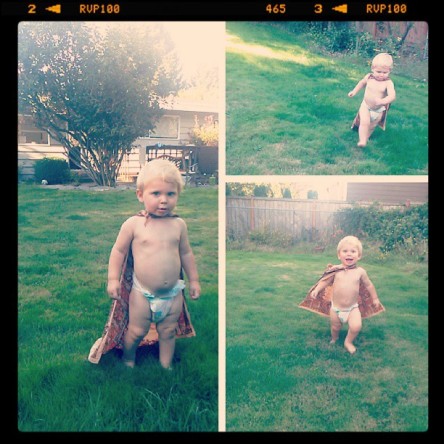 flying in the backyard

I am so proud of my boy. He’s made the transition to 3 days a week daycare (soon to be 4 days) and he is doing so amazing I can barely write about it. I mean, he’s doing so well that I feel guilty we ever tried to have him not be in daycare every day. Which I know is my mama-guilt-brain, because my heart knows that while he cried during daycare days, he was also with grandma, and me, and that’s priceless. But seriously, in one week he has gone from needing to be carried into school, promptly crying, and me tearing myself away…to walking into his classroom after carefully selecting the Dora-doll (he’s not allowed to have Dolly at school) and crying a little bit, but sitting at his breakfast table eating his breakfast. And today I picked him up from school and he was sitting at the table doing a little art project, and I suddenly saw his future flash before my eyes. And I got that creepy mom in I Love You Forever thought, that someday I’m going to sneak into his room and watch him sleep and miss my baby. Who was so sweet and snuggly and happy. Because he’s growing up so fast I can barely stand it. Which is the ultimate mom cliche and when I hear it I want to barf.

And that though, of him growing up so fast, is what makes me think about having another kid. I know, make up your damn mind Monk-Monk, one day you’re wanting to hold off, the next you’re talking about having kids. Yeah, I know that sounds like I’m confused, but I’m not. I know I don’t want another kid right now, I actually know that I’m a 1 kid person who would stretch to be a 2 kid person in that situation. Just like I was a 0 kid person until we had 1.

But God, I miss that newborn in my arms. I wonder about what it’s like to only have 1 birth story to t

\ell, that I won’t somehow get to experience that terribly difficult and powerful and beautiful experience again. And while I have felt very present and mindful through most of the almost-two-years of his life, there have been times where I’ve been angry and resentful and not present, and I regret that. But overall I am doing an amazing job of being present in this moment of time with Potamus, but the nostalgia and sentimental feelings persist. Where did my baby go?

Today Potamus did the hand motions to the “Wheels on the Bus” and yesterday he tried to put his socks on. He throws his hands up in the air and exaggerates the “what?” look when he does something naughty. He’s sleeping mostly through the night (in our bed) and is mostly- weaned. He nurses at night, once, but it rarely puts him to sleep. And sometimes I nurse him for 10 minutes in the morning to get him to fall back asleep. So it’s between 1 and 2 times a day, at most. There’s been days where he’s gone 24 hours without nursing. And his attachment to Dolly has ramped up. But we’re all sleeping well and in this little sweet spot that is so very good.

And yet we’re right on the back of a really hard summer interpersonally between Boof and I, between me and my own concept of myself, and while we’re in a little parenting-problem-lull, we’re struggling in other ways. Like schedules are still so crazy that I feel as if we are two separated-single-parents co-parenting, and doing a remarkably undamaging and also shitty job of it.

But my transition back to work has been stellar so far, though I’m tired more than I thought I’d be. Teaching starts officially on Tuesday, so that’ll add a new dimension to the weeks, but I am excited. for the challenge. I don’t know how something can both be such a hard time, but also such a good time at the same moment. It’s a very strange feeling to be straddling all of those feelings at the same time.

Tell me, how are YOU doing? What are your kids up to that you’re proud of?