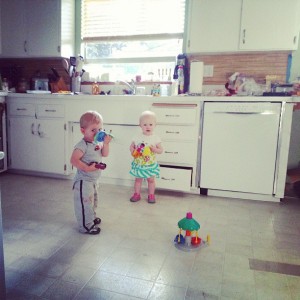 My tranquil night plus long stretch of sleep left me slightly crazy. Crazy, as in, I accepted the last-minute urgent request to watch my friend’s daughter. She’s a work-from-home mom who does some financial consulting and clearly her husband couldn’t get off work in time for her to make it to a client meeting. If it hadn’t been last minute I wouldn’t have said yes, because, let’s be honest…I don’t really like kids all that much. I mean, other people’s kids are cute to look at, but they’re pretty exhausting, and come with a whole other set of rules and expectations that don’t always fit into my schedule. 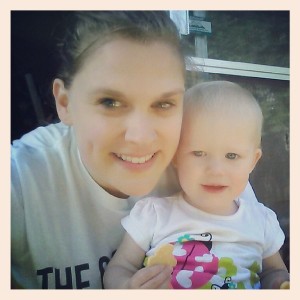 So, my friend shows up in a dither, clearly already late for her meeting, and drops her daughter off without even so much as a goodbye snuggle. Whoa. Stressful for baby AND for babysitter. I did the “look at the balloon” method that I see the daycare teacher’s use, and it worked…for a few minutes until mom came back inside to drop the carseat off. Whoa, set off a whole extra set of crying and tearfulness that lasted on-and-off for about twenty minutes. No big deal in the grand scheme, especially since her cries were WAY less nerve grating than my own kiddo’s cries, but still, we were heading into the witching hour and one toddler crying on my lap was bound to be two.

Potamus was so cute. He clearly has developed some baby-empathy, because he was hamming it up for her. He appeared to be trying to cheer her up…doing a little dance…bringing over all his new toys and wanting me to hold them and show them to her…and when she finally still wouldn’t calm down, he lost it. Which meant two toddlers crying on my lap. I think the glass of wine helped me to not totally freak out, and so I ended up mostly going about my evening routine…watering the yard, straightening some dishes, putting some toys away…

Potamus figured out shortly that being held by mama was boring and so he went off to play. Little Miss decided that playing, and having animal cookies, seemed fun, too, and so she toodled off to play with Potamus. They had a good time inside and then went to explore the backyard where full-on-witching hour reared it’s ugly head.

Let’s be honest, sharing is hard. Sharing when you’re a toddler and it’s almsot bedtime is even harder. When I told Potamus that it was Little Miss’s turn for the cart, his face looked so crushed. His feelings were SO hurt. And then he made that face. But not to be outsmarted by this, he went over to some random toy item he found on the back deck and got Little Miss’s attention. He then threw it into the flowers, distracting her enough to steal the toy back. While it wasn’t exactly what I wanted to happen, I was pretty proud of his problem-solving skills. It was cool for me to observe this interaction and to see, so clearly, his intention and smarts written all over his face.

Our crazy adventure only lasted an hour and a half. Dad swooped in as fast as mom had swooped out and tried to juggle the screaming kiddo while putting in the carseat (that he had never done before). It was quite the circus, but I’m trying to not judge, because it all seemed stressful and I had managed just fine. Potamus was wiped out, and fortunately fell asleep quite easily after all of the commotion. And it helped me to have another TV/media free night (with the exception of instagramming these adorable pictures).

Bonus. Today is my last day of work for the summer. Booyah!