Last night I got 6 hours of sleep in a row, which piggy backed on the 4 hour nap I took on Memorial Day, so I am mostly feeling like a new woman…which means I am approaching this whole “weaning” experience from a new angle. Mostly, the angle involves a lot of questions about practicality of those gentle weaning tips that article espoused. Cover the boobs? Okay, I can do that…sort of…but things like “don’t offer, don’t refuse” seems muddled. Don’t refuse? As in…never refuse?

Maybe my thinking is too black and white about that, but it doesn’t seem to jive with the recommendation of “setting boundaries.” Which is it, lady, ‘not refusing’ or ‘sometimes-refusing-when-I’m-setting-a-boundary’? Also, Potamus doesn’t have words yet, so he points to his lip and makes an “eh, meh” sound to indicate he wants to nurse. Or he pulls on my shirt. When my eyes are closed in the middle of the night and he’s crying I don’t see the lip-pointing motion and sometimes he’s too distraught to ask, so I just offer. Ooops, guess that goes against the suggestions.

Also…there are darn tootin’ times that I don’t want his newly vampiric teeth anywhere near my nipple, and so, even if he asks nicely, I’m going to say “hell no.”

But something has shifted in my thinking. I’ve felt this sense of calm about the whole weaning issue. It’s not about weaning, it’s about letting my baby grow up. In the past week he’s tried so many new foods, begun RUNNING and CLIMBING (like onto the couch, no big deal, just chillin’ with the dog), throwing the ball, KICKING the ball…it’s like he’s gone from baby to kid, overnight. He has had a few long sleeping stretches and suddenly has only been nursing 1-2 times a day. This might change, but I have looked at him and realized…

I don’t need him to nurse to feel bonded with him.

I know that I’ve nursed for his sake, but also for my sake, and I’m okay now with him weaning if he’s ready. I’m also okay with it going on a little longer, too, if he wants. I feel like it’s just happening all in leaps and bounds, and we’re both growing up so fast. It’s amazing what a little sleep will do for perspective, eh? 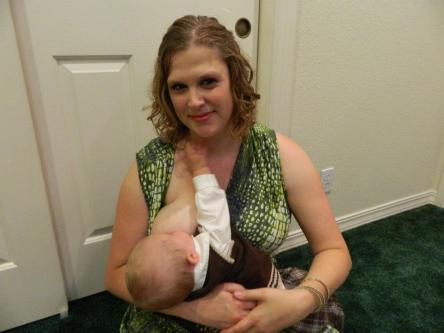 Last night I half-joked in a crazy sleep deprived stupor “maybe if I bash his head into the wall he’ll stop crying.” Boof immediately snapped “that’s not even funny to joke about.”

I don’t know how other nursing mother’s do it, or if their children are just amazing at the whole sleep thing, but Potamus sucks at sleeping. Seriously. He sucks without me, and he’s only marginally better with me present. I read those things about human development and bonding and attachment and psychology and I know that, in the grand scheme of things, I am doing a really good thing for Potamus. But I am also concerned that I am losing myself slowly into a pit of black or white thinking about nursing. It’s been 17 months, over 3500 nursing sessions to date, and frankly, I am exhausted.

I also love nursing. Really love it. Love the bonding time with Potamus and the way in which it easily calms him down. But I need more than 2-3 hours of sleep at a time. Because, there’s only been a handful of times, in 17 months that I have gotten more than 4 hours of sleep in a row. Actually, it’s been twice, and it was one 6 hour stretch (that he slept, I only slept for 5) and one five hour stretch. The only time I’ve napped for as long as I need has been twice, in the past two months. On paper it looks like I’m getting 6-7 hours of sleep a night, but it is so chopped up and full of movement (from room to room) that I don’t think I’ve had a full sleep cycle in a few months. I’m hypervigilant about NOT sleeping, for example this afternoon I barely let myself get sleepy during naptime, because once I started to doze, after 30 minutes, he was awake, crying, and I couldn’t get him back to sleep…nor could I go back to sleep. It’s causing me to be crazy. I literally feel crazy.

So I think about weaning.

I wonder, is it even worth it anymore?

When I don’t have thoughts of dashing my kid against the fireplace, it’s thoughts of running away, not telling anybody, and sleeping in a hotel bed for a week. I’m literally that exhausted. And we’re crazily thinking of having another kid. I just might freak out.

It’s a chicken-and-egg problem..I’m so tired that the thought of beginning to wean in anything other than cold-turkey is exhausting. Putting up with tantrums and slow progression and figuring out alternatives (especially when we can’t figure out alternatives to even food). I read an article entitled 12 Tips for Gentle Weaning and thought there were some really good suggestions. I think I’ve been wishy washing on the whole weaning issue, wanting it to be solely child-led, but I’m wondering if I’m becoming a doormat in this relationship. It’s been easier to just give in then stand up for myself and what I need in a moment.

While I’ve noticed that we’ve cut back some, it hasn’t really been consistent…I give mixed messages, like when it says don’t offer, don’t refuse. Whoa, that’s pretty mind-blowing. I offer all the time, especially at night. I flop down and whip it out. There have even been times when he hasn’t even moved toward the boob and I think “um, what? he doesn’t want to nurse?” Wowzers, I have some things to work on.

And, I had to laugh, at the “cover up your boobs,” (okay, it just says cover up), but holy crumb cakes, a nursling can be triggered to nurse for up.to.a.year post weaning. Wow. I feel that I know so little about this whole process. I guess I just assumed that one day it would just stop…and that I wouldn’t miss it, and he wouldn’t miss it, and bam bam bam we’d be on our way. I guess if it was hard to start, with weeks of struggle and crying and feeling totally overwhelmed, then the end of a good thing is going to be hard for both of us. But I hadn’t even though that what I am wearing could possibly be contributing to him prolonging the nursing. I’ve just been wearing skimpy tanktops because I had gotten so accustomed to needing to whip it out quickly.

But then I also wonder…if he was just a better sleeper…if we did different routines at night when he wakes up sad, would that help? I don’t want to make any rash decisions based on being exhausted…but I don’t think I’ll be less exhausted until I, at least, explore the option of him sleeping better. I just don’t know. I’m all sorts of muddled in the head. I know he’s sick-ish, and teething, and don’t want to just freak out irrationally, but I am so tired. I just want a kid who sleeps for more than 3 hours at a time, you know? I keep hoping and waiting and hoping it’ll happen, but it’s not, and so I think I need to do something different.