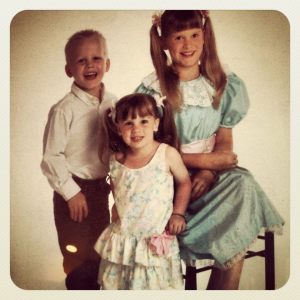 not the same picture, but taken around the time of my terrible dream

A lot of childhood memories have been floating up to the surface, which I attribute to my wrestling with having an only-child vs. having another child spaced 4-5 years apart. When thinking about all-things-kid-related imagining into the future starts with progressing into the past in order to see…how would I have felt, which is narcissistic at it’s core (because Potamus is not me), but that’s what I’m working with right now. And so, imagining a 4-5 year age spread means going back into my past and remembering what it was like when my sister was …er…adopted into my family.

We drove from Seattle to Oregon where she had been born.

We had a necklace or some other gift that my brother (2 years younger than me) walked up to the lady in the hospital bed, and gave to her. I think we said something like “thank you,” and that’s all I remember (more could be said about this bizarre memory, as it was a concrete experience of what adoption-birthfamilies was, but I didn’t really analyze that until older). The next thing I remember is we were on our way home, somewhere up I-5 and I realized…I had left my favorite Skipper doll in the hospital.

And they wouldn’t go back to get my Skipper doll.

We came home with a baby, and I lost my doll.

And I lost my position in the family as the only girl.

And I was at an age where I was embracing my princess-tomboy style, but I was clearly no longer the only girl, and she, in all her tiny bundle of joyness, became the family princess.

I don’t remember much about my sister until she was in pre-school. Coming home on the first day, eagerly declaring “I like TEN BOYS in my class, there’s Jordan, Taylor, etc,” and me saying “that’s not how it works. You don’t get to like more than one boy at a time. you grow up and marry one person.” But she was always the princess. And I grew into a new role…the protector. 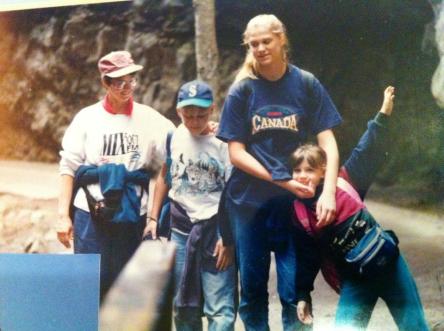 can you see my annoyance with her fabulousness?

Both jealous and protective of this fragile, dainty, cheerleading popular kiddo (who grew into a fragile, dainty, cheerleading popular, fashionable adult), who was so different than me, and mostly annoyed me. We shared a room and she wanted to talk all night. I wanted to sleep. She wanted to play dress up. I wanted to read. But in preschool, I remember a photo of her was taken. She was holding a plastic pan, and looks caught by surprise. And it was hanging on our mirror the time I had the dream.

In the dream, we were in Disneyland, and she died.

I woke up crying.

I carried that picture with me until I hit college (and she stole it back) because that’s how I remembered her, so young and innocent and for me to protect as her big sister.

And so, I think about things like that when I think about having another baby someday. That the dynamic will change. That there will be complicating factors and emotions and memories that Potamus will have of the time he had alone and the time he had when the sibling enters the scene. It will be different than my own memories. And if he doesn’t have a sibling he will not have those memories to look back on. It’s complicated and emotional on many different levels.

My relationship with my sister is currently also complicated. I will always be her big sister, protective, blunt, and loyal, but also jealous of her carefree swagger.

How are your sibling relationships? How has it influenced your decision to have/not have kids (or to have more) kids? Have any striking childhood memory involving siblings?

When strangers ask me how many brothers and sisters I have, I usually have to pause, and think before answering. If it’s just the run-of-the-mill stranger, who I won’t see again and the answer “two” will suffice my conscience, I go with that. If it’s someone I think I might remotely run into again, who might remember my answer of “two,” and then question me about why I am suddenly talking about ‘my little sisters,” or, “my other brother,” I have to answer more truthfully, which is more of a mouthful than a number. There are stories and backstories to my answer, which makes things complicated. On a good day, I have six, though two I almost always claim, since I was raised with them, despite the fact that we share zero DNA, two “halfs” as I refer to them, since that denotes the fact that we do not share the same father, and two “littles,” because thats what they were to me when I met them: 4 and 8…little sisters.

I was in graduate school when I found my sibling’s families. My sister is lucky enough to be born in a state that allows her easy access to her Original Birth Certificate (you know, the one that’s historically true, and lists the vagina she came out of, and not the made up one that she carries identifying her as being my sister by blood). Once she got that certificate in the mail she had a last name and my sleuthing dug up an old Classmates.com account and voila, she was in contact with her mother. And her sister. Or half sister. I’m not sure how she classifies it, now.

My brother wasn’t so lucky as he was born in the same locked-down version of Washington State law that doesn’t allow us access to our own medical and historical documents without having our parent’s consent (though how the fuck we get the consent when we don’t know who these people are is beyond me). We did have first names, though, and the information that they were married, or at least HAD been married at some time. 24 hours of hardcore internet searching, cross-referencing and examining birthdates and address records, led me to his parents. They are married. One older half brother. Two younger full sisters.

Confused yet? Cause I sure am…

So I was talking to my sister Poochie this week, and she was telling me her excitement and anxiety about going down to see her family in Oregon. That she was walking Hood to Coast with them, her mother, and grandmother, and aunts and cousin and her sister. And that she was excited because “all the girls” were gonna be in the same van.

But I would not be in that van.

And I felt sad.

Not intentionally, or like I even want to be a part of her family in that way, but because she and I weren’t doing something together. That I had to share, and sharing is hard, and I wanted to say mean things like “my son is cuter than your other sister’s son,” but I held my tongue.

Her reunion with her family is what I’ve wanted and advocated and fiercely defended to outsiders and our parent’s alike. Same with my brother, though he is much more private about his encounters wiht a fully functioning biological set of family, though I am often startled when pictures pop up unsolicited online.

It’s not that I want their other lives, but I sometimes long for it to not be so fucking complicated.
Mostly I just kinda wish I was wearing pink sneakers and walking to the ocean with my sister.