I keep hearing repub-types saying things like “where were you four years ago?” in an assumptive attempt to sway votes toward the Ryan/Romney camp. But it got me thinking, reminiscing, on where I actually WAS four years ago…where I am today…and the implications of my answer might not make those repub-types as happy if it means I’m going to vote for this trend to stay the same.

Now don’t get me wrong, as a privileged white woman of middle class origins, I know that many many people in America have not been as fortunate as me in the last four years. But here is where I was four years ago:

September 2008
Boof and I  are three months away from our wedding date. I am taking 10 graduate credits, in full last-minute-wedding-planning mode, and working part-time as a substitue teacher. I lived in a little one bedroom apartment that had been infested with tiny little flies after the basement/crawl-space that had been flooded when a sewage holding tank backed up and overflowed.

In the four years since, I have gotten married, lived in a sweet 2 bedroom apartment (with no fly infestation), gotten a dog, received my Masters of Arts in Education, Community Counseling with a 4.0 GPA and honors, gotten pregnant, bought a house for a good price and in a good neighborhood, had a healthy/happy baby, become a licensed counselor, and had three progressively better paying jobs in my field of interest.

Whoa, that’s a huge list of amazing things that have happened in the past 4 years! And if that’s because Obama has been president, well, then I can’t really complain about his leadership.

And with this being the anniversary of September 11, 2001 it got me thinking. Where were YOU four years ago? But also…where were you ELEVEN years ago? It’s amazing for me to look back on such a tragic day and see how beautiful my life has become. 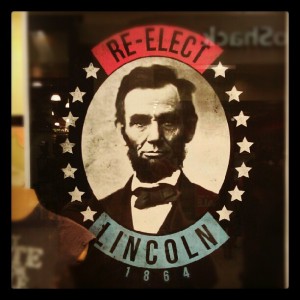 I missed my first election by aproximately 1 month (dang you December birthday!). I remember filling out all the paperwork in my US Government Class in high school. It was a requirement for all of us to register to vote, and we spent the course of the semester researching the election and having debates on different issues. I was bored. It’s not that I didn’t care about stuff, it all just seemed so BIG, so confusing and convoluted and that everything was full of half-truths and 3/4 lies. In some ways, I was very glad that I wasn’t able to vote yet. It gave me pause and a 4 year excuse.

I was in college when the next election came around. Bush was in office and the choice was to re-elect him or elect John Kerry. It’s then when I found out that my Government teacher hadn’t actually turned in all of our voter registrations. Therefore, I was NOT registered to vote. Not really wanting Bush to stay in office, but still being a part of the conservative Christian church and not yet being able to fully articulate my differing spiritual AND political beliefs, I felt that I escaped the election unscathed, being able to walk the line of Bush-Bashing with my hippie friends and deferring to the president with my Christian Righters. Best of both worlds, no? Plus, Kerry looked like a basset hound, I couldn’t very well get the motivation to vote for that guy, right?

In my heart I voted for Obama.

Once again an election came…and went…but this time I pretended to be more political. I even went so far as to tell people I voted for Obama. I justified it in my mind by the belief that 1) I live in a liberal city and state where the electoral vote goes toward Democrat candidates, 2)if I voted for someone other than Obama, it likely wouldn’t have mattered;  therefore, my city, and my state voted for Obama, which kindasortameansthativotedforhimtoo, right?

Apparently, it’s all about the presidents.

And then, this year hit. And I was just as apathetic about the whole thing again. I loathe the commercials, the lies, and the overly slick hairdos. . . But that conversation with my dad, about democrats being evil, really got to me. While I have now processed the emotions, it certainly sparked an initial feeling in me that went something along the lines of ‘well, maybe I should vote, simply to cancel out my father’s vote.”

Thankfully I have grown a little since that incident, but Boof looked at me with raised eyebrows when I told him that I finally took the plunge and registered. His line, “I asked you if you were, since I know you’re passionate about things like gay marriage.” And truthfully, it’s something that I’ve been missing…there is SO much focus on the presidential election, for which I feel like I have very little control thanks to the electoral college…but these local things…these things I just might be able to influence.

Of course, I still have a few weeks to change my mind about actually putting in black/white my beliefs on things…but at this point, my beliefs and passions for equality are driving me toward the voting box (which, in King County is my mailbox).

What motivates you to vote?