I didn’t dread mother’s day as a child, it was always my birthday that brought up feelings of confusion and frustration around abandonment and adoption. But once I became a mother, myself, I realized my uncomfortable relationship with the archetype of motherhood.

And yet, I love being a mother. Rather, I love being a mother to Potamus (most times, like when he’s not hitting me, or only eating chocolate chips). Motherhood has awakened a nurturing part of me that has let me settle into a part of who I am that I didn’t know I could even feel, let alone express. I dare to be more myself because I am a mother. I must be as authentic as I can, to set a good example for the little one I’m responsible for raising to adulthood.

But I feel motherless, in so many ways. I feel like I am discovering this part of myself and it’s unrelated to the experiences, or non-experiences, I had with my own mother(s). Even the act of buying a Mother’s Day card fills me with angst, because no Hallmark writer could ever express the feelings I have about my relationship with my adoptive mother. Hallmark could never write the complicated feelings I have toward and about my biological mother. And this year, my mother-in-law sent an email saying she definitely didn’t want anything for Mother’s Day, and so, clearly that relationship feels complicated too.

If I were stronger I might embrace the toddler years and say fuck it all, and make everyone focus on me as a mother. Me Me Me, and just let everything else just fall away. 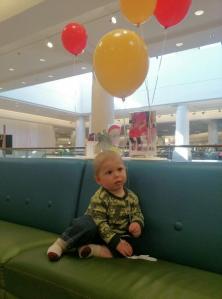 After anger freakout 2013, I had a really nice week, which ended with a secret day off (Thursday) and a coffee date with a friend and her 11 week old baby. I love hanging out with her because she has such similar experiences of post-partum depression and sometimes an inability to cope with her 3 year old’s tantrums, and she cusses like a sailor and isn’t afraid to drink a mimosa while nursing. We had so much fun on Thursday that we headed over to the Nordstrom Cafe on Friday for a lunch, and Potamus was well-behaved, and enjoyed his fun balloon! It’s nice to be around other moms who understand and I don’t have to feel like I need to have it all together.

The sun has been shining this week and it has been GLORIOUS! Boof and I just finished a 2.5 walk in the evening sunshine, re-connecting after a stressful week for both of us.

This week my boss asked me if I would work over the summer, teaching 2 days a week and being in the office 2 days a week, just like now. I looked him straight in the eye and said, “I would be happy to teach 1 class, 2 days a week, but I am not coming in to the office.” Not sure where my cajones came from, but I think my family time is VERY important and I am on a 10 month contract, with summers off. The best part HE WAS TOTALLY FINE WITH IT! And I am freaking excited…what it seems like is an answer to my decision to not pursue that faculty counseling position because of my desire to teach more and BAM three days later I was asked to teach this summer. Booyah! Two days a week, for a total of about 6 hours in class teaching (and a few hours grading papers), which will allow Potamus to be out of the house at daycare, keeping a rhythm going!) and I will get to wear big-girl-pants and shower and have a reason to wake up before noon everyday. Perfect! And, with the other FIVE days spent as a stay-at-home mama, I think it’ll be a good match!

Potamus is now standing independently on his own…and he’s obsessed with bear crawling into the middle of the room, standing up, and then raising his hands in a victory/touchdown stance. I love how proud he is of himself. Though, at 14 months, he is starting to look silly without any teeth!

Uncle Silly came to town yesterday because of a miscommunication. He’s babysitting next Friday for us so that we can go to a wedding, but he thought it was last night. No love lost, though, we hung out, I bought him some yummy dinner at our favorite brew-pub, and Potamus was in high heaven. Seriously. That kid isn’t going to even notice that we’re gone next Friday, as he was obsessed with playing ball and clapping and showing Uncle Silly all of his toys. Love it. Uncles are the best. And heart to hearts with my brother are awesome, too. I love that we’re both parents and have this way of relating that is just so much more natural than when we were kids.

It was a good week.

But, the highlight of my week was, by far, the two hour nap I blissfully took yesterday. It was my second nap since maternity leave (my first nap was last weekend after the 5k). It was that blissful time when I was lost in dreamland and woke up in sleepy hazy sunshiney goodness and was so soulfully restored that Potamus crying later that night didn’t even bother me. There’s just something amazing about getting a little extra sleep!

I used to think I was an introvert, but the more I learn about myself, the more I realize that I am a highly sensitive extrovert, raised in the clannish and isolation-minded Pacific Northwest, with a genetic and environmental disposition toward depression, seasonal depression and anxiety.

So now, as I struggle through postpartum depression, I have had to force myself to break away from all of these forces working against my health and healing. Medication, talking with family, taking daily showers and putting on mascara regardless of whether I am going to sit on the couch all day in sweats or not, and, most recently, meeting other moms.

Let’s be honest now, moms make me nervous. Before Baby Boof was born I was really nervous about having to make mom friends, because I am not necessarily intersted in talking about diaper sizes or wearing matching outfits with my child and pushing them in a pram. Moms can also be a judgy lot, and I am just not interested in trying to live up to some sort of mother-of-the-year-award. But my single and married-without-kids friends just don’t “get it” like moms do, so, with some trepidation, I have branched out to meet some moms.

My first solo venture into this arena was finding a local meetup for moms with babies/toddlers in my area. I figured that an event titled “moms with strollers” wouldn’t be that scary, especially since it was 2 blocks from my house, and worse case scenario I get in a good walk and never go back.

What surprised me was how awesome all of these moms were. While I didn’t connect with all of them at the same level, there were a few I could see myself actually hanging out with in the future. And my sense of humor shined through, which is often not the case in a new or strange place (I’m the girl shoveling food in her face at the snack table at parties). The weather was glorious, seeing the sun after “Winter Blast 2012” that we survived last week, was an added bonus. The combination of sunshine, exercise, and good conversation were so inspiring to my mood, that I found myself happy the rest of the day. Perhaps moms aren’t so scary after all?