Talk about heart growing four sizes in the past 9.5 months. Seriously. While I wasn’t necessarily always a hard-hearted grinchy type person, I rarely batted an eye at sad stories in the news or books or movies. In fact, there was a time that I prided myself on never cryting during movies (especially not during Titanic, because WE ALL SAW THAT COMING, since, it was, based on history, after all). At one point I even felt that crying could only be accomplished when reading a few key essays from Chicken Soup for the Soul, cheesy, I know. Perhaps my grinchiness was actually due to the fact that I felt so much sadness (depression?) inside, that if I let myself spontaneously cry, I felt as though I might never stop crying, and I’d still be sitting in my childhood bedroom sobbing, as a 30something adult (because, as a teen, that was as far as I could really imagine).

But since Potamus came bursting onto the scene, breaking down all of my heart-walls, I have actually found myself drawn to sadness…not as much in a must-have-catharsis-because-my-sadness-is-so-bottled-up way, but more of a genuine curiosity in relating and sitting and mulling over the place this emotion has in the world, as well as working on boundaries of sitting with sadness and feeling other people’s sadness through empathy, but also not carrying their burden inside myself, because I have my own sadness, and their sadness is not mine to carry.

As I was perusing my favori Parent Section of Huffington Post, I came across an article entitled: Lots of Tears With Less Than a Few Months to Live, where a woman writes about her experience blogging, with stage IV breast cancer, with only a few months to live…as a mother of a sweet girl Niomi.

I haven’t ventured to her blog, as the article left me struck with sadness, and my boundary is to only go as far as I feel like I can still keep my life-preserver and leave the sadness when I feel like I am drowning.

I will never get over my fears of not being there for Niomi as that is what truly scares me to death, but until the day comes, I will live each day to the fullest. I will instill in her the most valuable lessons I can. I will teach her to be strong, to give her advice through letters, through videos and even through our little talks while she’s falling asleep at night. But for now, we live day by day and that takes my fears away.

Can you believe I won’t know the season finale of Grey’s Anatomy, Private Practice and Parenthood? UGH. Now, that sucks. Hopefully they know these things in Heaven.

Initially I was a little embarassed about admitting that the sadness of missing a TV show, but it was so refreshingly honest and real and a great metaphor for missing all those little, mundane, real moments that we take for granted. Of course, as I go home and watch our DVR’d episode of Parenthood, tonight, with Boof, I will think of this woman who is dying of the same cancer that the character Kristina is diagnosed with.

But most gut-wrenching, is her explanation of how she is going to live moment-to-moment with her daughter. While hopefully no cancer is looming on my horizon, I got to thinking about the loss of mother, from a child’s or infant’s perspective. Does Niomi understand what is about to happen in the very-near future? Does she see and experience these moment-to-moments with her mama in a way that will stick with her somatically and emotionally until she is a very old woman?

Before Potamus, I believed that if I died, people would simply go on. I often wondered about what it would be like to simply cease to exist (not so much in a suicidal way). And I know, with my head, that Potamus would go on…everyone does, in their own way, but how can I go on?

Maybe that’s a weird statement. And maybe it’s selfish, but I wonder…if I was dying, how would I feel about going on without seeing Potamus grow up? I would be sad that he would grow up without me, but I think much of my sadness is on my end, around not wanting to miss his milestone moments. 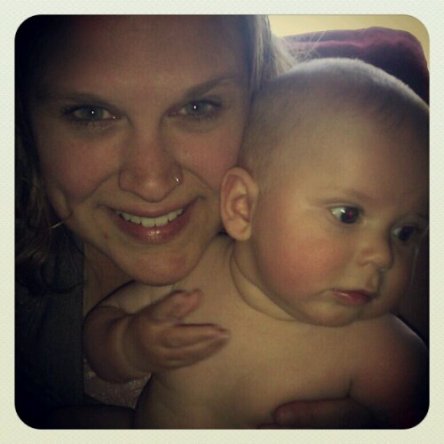 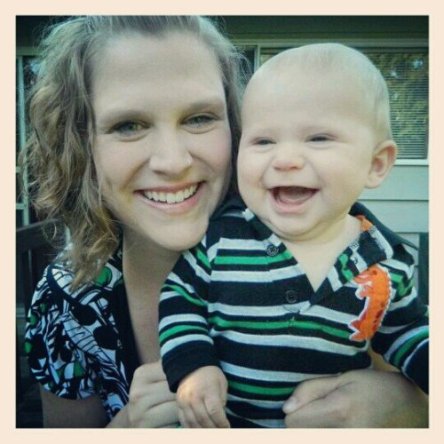 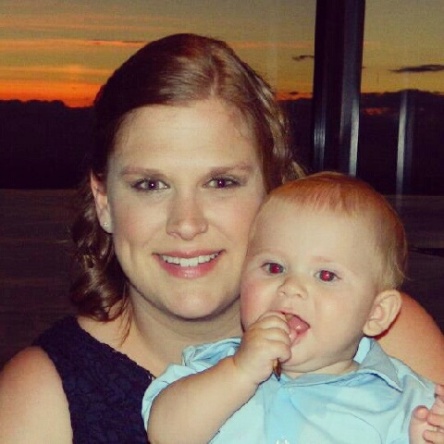 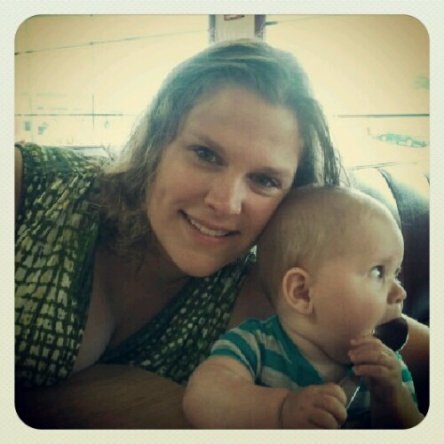 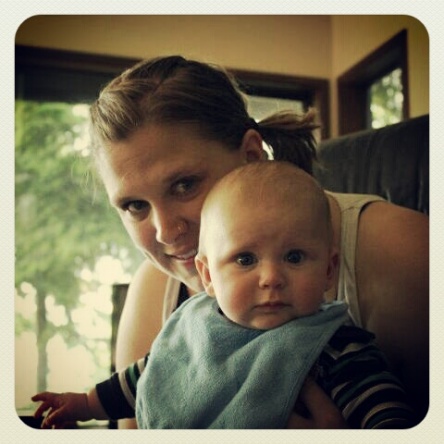 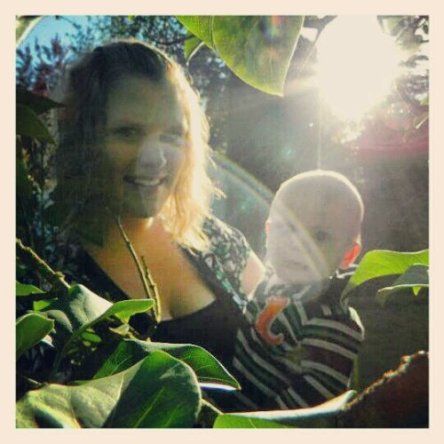 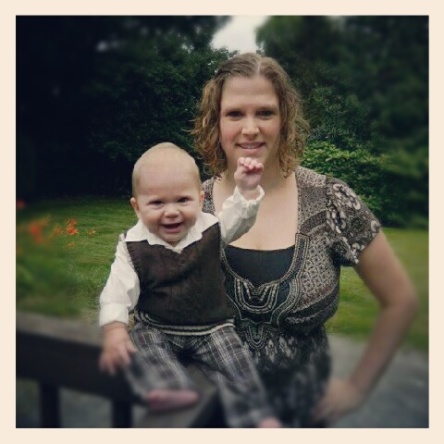 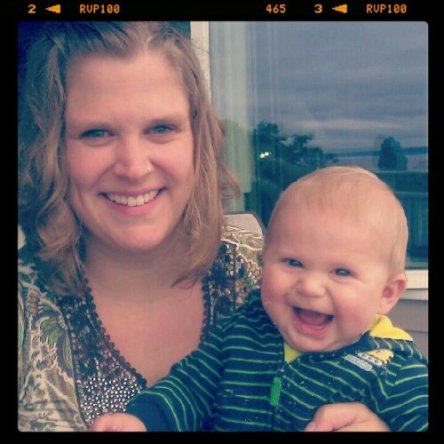 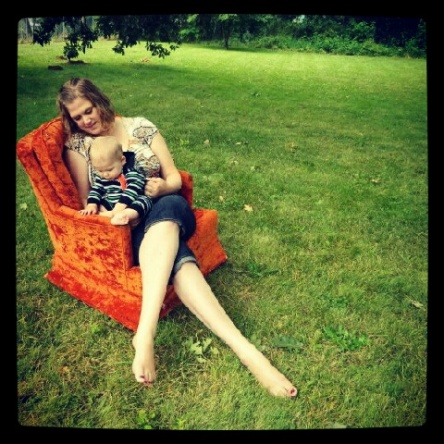 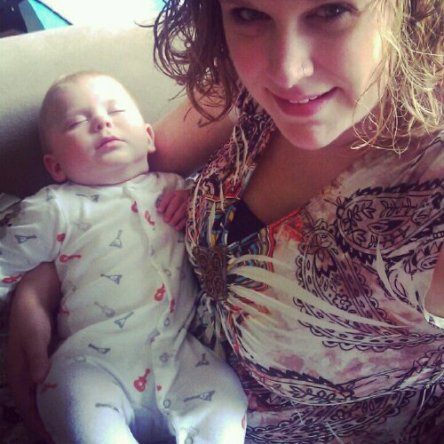 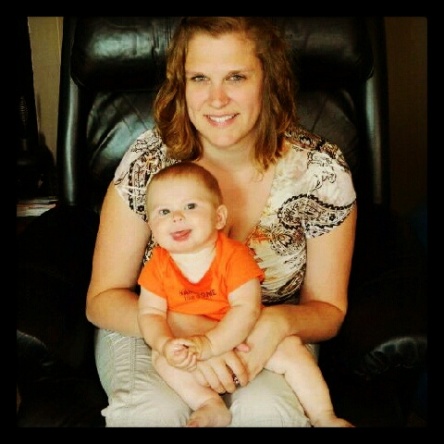 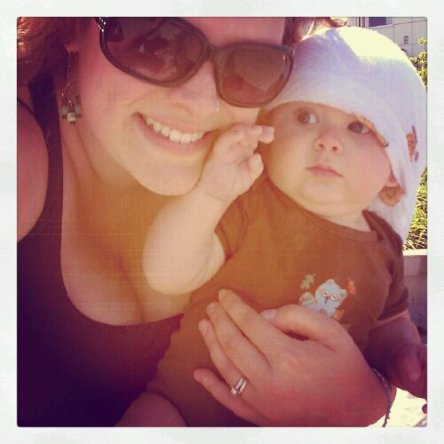 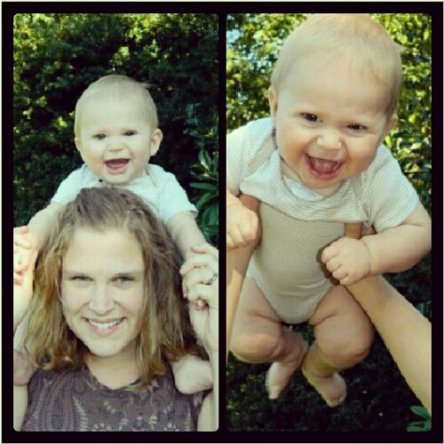 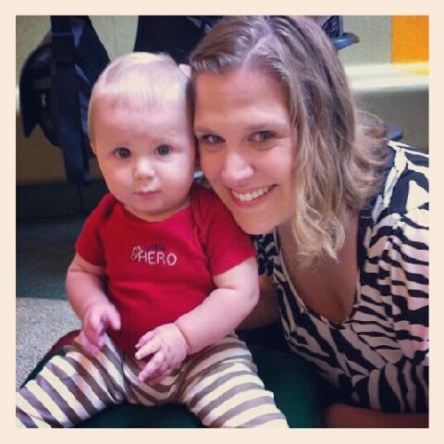 The internet is blowing up with the story (originally found on Huffington Post) about how moms aren’t found in their children’s pictures, for whatever reason (self-esteem, they’re the ones taking the picture, etc.), so there’s this campaign to get mamas into pictures.

I saw the original article and thought it was interesting, but passed it by, since I find myself often mugging for a shot with Potamus. But then when I saw the article featured on Offbeat Mama, I knew I had to comment:

“Maybe I am just a narcissistic cow, but I freaking LOVE being in pictures with my baby. And I shamelessly ask people to take photos of us, even when it annoys them (because I also shamelessly ask them to re-take it if its blurry).”

AND write a little post, showing the evidence from many of our self-portrait shots.

I wonder…where are YOU in the pictures? Do you tend to be in more shots than your child’s other parent? In our family, Boof is less predominate, preferring to mostly stay behind the scenes. If you aren’t in pictures, why not?

I was reading this article The Day Female Longboarders Taught me how to be a Badass on Huffington Post, and it hit me in the gut. You see, I have badass women friends that I admire and frankly…am pretty effing jealous of. Melissa Sher starts out saying:

I’ve wanted to be a badass for as long as I can remember. But the closest I ever came was in college, when I got my belly button pierced. Sadly, I had to remove the belly ring after only one day because it got infected. Three pregnancies later, my scar has stretched so that it now looks like a small, upside-down question mark, as if asking me, “What were you thinking?”

I giggled at this, thinking about my impulsive moments in college where I got my tongue AND nose pierced on the same day, and how utterly “cool” I felt with that. I mean, it’s not anyone who would just finish a rafting trip with some new friends, strike up a conversation about tongue rings and realize that you BOTH had wanted a tongue piercing, and then hop in the car and head down to the local tattoo shop to get it done…especially not after I had been there that morning getting my sparkly nose-stud.

This idea of being a badass woman is one that I’ve thought about for awhile. I have goals people…GOALS, though most of the time that goal is to get up off the couch (stop blogging Monk-Monk, get out, enjoy life!) and do something really badass, like changing a poopy diaper. These friends that I’m jealous of include:
1) my bestie from college who married a rock-climber and they’ve adopted 2 australian shepards that they’ve found out on the trails (on 2 separate occasions). They travel around on weekends (and he, for work) bouldering and hiking and camping in the back of their truck. She is a badass. She can climb rocks upside down and the muscles on her arms are toned to a ridiculous point. Best part is, in pictures she looks so incredibly happy.
2) my current bestie who recently double-dutched on her wedding day IN HER WEDDING DRESS, because she loves being a part of her jump-rope group so much. She does Hood-to-Coast and her honeymoon wasn’t to the typical tropical places..no, they road-tripped through Banff, Canada. 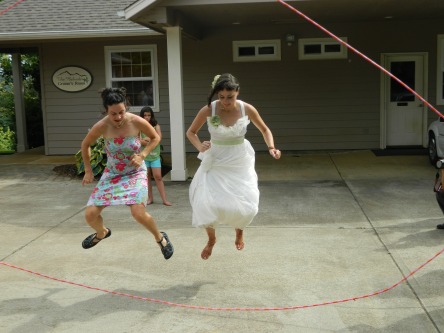 3) my good friend from school is a Crossfit maniac, when parachuting last summer and is training to be in a Tough Mudder competition (think 12 miles run full of full-blown team obstacle course!). She’s currently on her way to Croatia with her husband to vacation around, which just seems so badas.. not Paris or London, but Croatia (I mean, who has even HEARD of Croatia 😉 ).

A few examples of women in my life that I admire. Like the women in the article, I long to do thrilling adrenaline rushing things. I sometimes feel like I chose such a safe life…marriage to a man, home-owner, middleish class, one dog, one kid, etc. Sometimes I wish I were brave enough to get on a long-board and go 40 mph down a long winding hill.

All of those things make me badass.

Though this drive to be physically badass…through long-boarding or yoga or running in obstacle courses, keeps calling to me…and yet…I still am not quite to getting my goals into practice.

Tell me…in what ways are YOU badass? And how did you get to where you are?