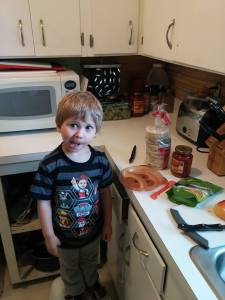 Yesterday Potamus was a part of an early intervention screening process at daycare. It’s a part of a grant in the county, and I was happy to take part.

Today, I tried not to panic, when I got a phone call from the screener asking for a callback to discuss his results. She had told me originally that the results were going to be in the mail. Wuht?!

Turns out my kid is bright. Inquisitive. Does well with others. Answers questions with good sentence structure when asked.

And during times of ‘spontaneous language,’ when just observed by her, he has difficulty being understood. This observation is not something out of the blue for us. We’ve noticed. His teachers have noticed. Yes, our kid sometime speaks in a language that sounds like elvish, or Pentecostal tongues.

He’s also the youngest in his class. And when he does speak, he’s expressing complex ideas that, to my untrained child specialist brain, seem far advanced from a 3-almost-4 year old. Like a discussion the other day about how his friends M & J “don’t like things that are different,” when explaining why they “get really angry with me,” because he brings a My Little Pony to school. So while we are exploring the suggestion of, in a few months, having him screened again to see if it’s changed, and I’ve reached out to a speech language pathologist that I know and trust, we also are in the same boat where we feel like our little guy’s brain and mouth are in two developmental spots.

It seems to go in waves. There will be weeks where he’s clear as a bell, and then it seems like he goes through some sort of developmental leap (physical or emotional or even in language learning) where he speaks gibberish and is hard to understand (and is now able to express frustration at us, mostly through deep sighs and body language resembling a teenager), and then one day snaps out of it with an enhanced vocabulary that’s clear as a bell.

Googling hasn’t been helpful, or I’m not using the right search terms.

At any rate, it was nice that there were no big surprises in this screening. Nothing signalling that our parenting gut isn’t right on. And now we get to decide…how much intervention to explore, and how much to wait and see its natural course.

To be honest, I’d rather he see someone to break his picky eating habits…but that’s another entry…