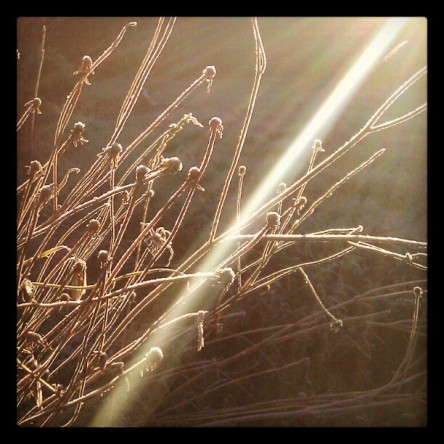 In a work ‘break-out session’ during our college’s opening day activities, I participated in a group activity about identity. We had to make a little pipecleaner sculpture representing 4 parts of our identity, and I chose marital status/region/sprituality/family structure. I was a mother, wife, from Seattle and….agnostic.

When I said the words out loud I almost fainted. It’s the first time I’ve ever said that out loud, especially to viritual strangers. And when the president of the college (who happened to be in my group) and another group member went in explaining their identities and said they had also chosen spirituality, and said they were Christian, I noticed myself all aflutter inside. My first reaction was to say “wait, I meant Christian. Yeah, I’m  Christian, you guys, don’t listen to anything I say,” but I didn’t say that. I just felt it. The uncomfortable desire to want to fit back in.

It was an honest answer in an honest moment. Though sometimes the answer will be Christian. And sometimes I might say Buddhist. Because I feel like I’m all of those things. Buddhist. Christian. Agnostic. I’m not sure how those labels all work together, but they feel true in this moment. Just like sexuality, it’s hard for me to quite fully feel encompassed by one label. But that’s for another post.

So here I am, in this place of unbelief and belief.

We went to church last Sunday and it was so sweet. I didn’t feel cynical and angsty. The songs were lame and I sang them anyway. Potamus sang with us, in his little toddler cooing, ahhing, voice. He paid attention during the sermon, though the little bag of cheddar bunnies was far too crinkly for  my liking. We chatted with people afterward and it felt lovely to have a sense of community.

And yet I wasn’t convinced. It felt like home, but it didn’t feel like answers. It just was. I was. Like floating in warm water, rather than trying to fight a current, or swim upstream, or any other cliche about something being a struggle. I feel okay with where I am. Like maybe the answers will come to me, or maybe they won’t but as long as I’m asking questions I’ll be okay.

Though I’m not going to tell my parents the whole agnostic bit. Because they’d probably shit themselves. And that’s just not something I’m interested in cleaning up.