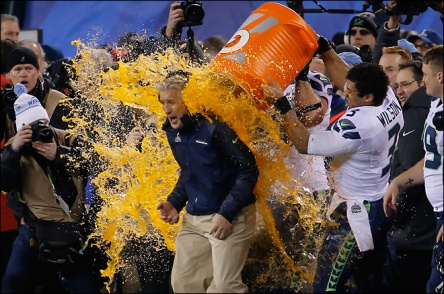 Hot damn, the Seahawks did it! We fucking KILLED THE BRONCOS yesterday in a total Rain City Redemption.

But can I be totally honest…

I love football. Not to the crazy chest-painting level, but definitely more of an appreciation than your average girl (whatever the hell that means). But yesterday’s game was exciting for maybe the first half, and then…snorefest. Even the commercials were over the top sappy and I spent my time texting some friends who were at least drinking on the East Coast at their Super Fan all-expenses-paid-party (did I mention the party I was at was dry? Yeah, maybe that contributed to my apathy).

When we left, Boof said “well, that was hyped up like Prom movies and I have that feeling of letdown like when you get to prom and realize that it’s really just not that cool.” I mean, don’t get me wrong, I loved winning, I loved hearing the fireworks and knowing that we FINALLY have a Super Bowl championship under our belt, but it kinda felt like losing one’s virginity in the back seat of a Dodge Dart. Ya know? Like, sounds good in theory (does it? really?), but isn’t as exciting when you’re experiencing it as you first thought.

At any rate, I’m glad we won. I hope we win again. But I was hoping for a little more spice. My buddy Russ said it perfectly, when he tweeted out “So, the NFC championship was the Super Bowl,” because THAT game was balls out amazing.

Though, can we talk for a second about Percy Harvin? Talk about a ferrari of a player! Looking forward to his continued contribution next year…

What were YOUR thoughts on the Super Bowl yesterday?