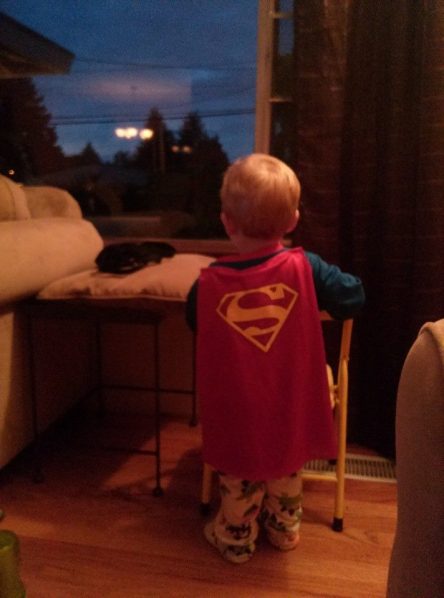 waiting up for grammy and grampy

One thing I hate about being a parent, is when I feel more grown up than my own parents. Since Potamus was born I have found myself in many situations where I have had to be assertive, not just for my own sake, but for the well-being of my son. Like last night…Potamus had stayed up to see grammy and grampy come over. We were listening to music on our TV and the Miley Cyrus “Wrecking Ball” song came on. My son was looking at the TV and my dad said “Potamus, isn’t she stupid looking?”

My immediate reaction was to say, “dad, I don’t think we want him exposed to that kind of name-calling.”

Because, by calling Miley Cyrus ‘stupid-looking,’ sets an example for him to look at people and judge based on their appearance. Not to mention, simply saying “stupid looking” doesn’t really get to the heart of what my dad was actually trying to say. Because I know him, I know that he was meaning, ‘hey Potamus, don’t follow her example in dress or dance,” but the bigger social commentary about drugs, fashion, ‘secular music,’ and sexuality is lost on a 22 month old…so it was reduced to a ‘looks stupid’ line. But ‘looks stupid’ is something that Potamus might repeat…and might repeat in daycare or school about someone his own age. He might think that it’s okay to call people stupid or that if he dresses a certain way he will look stupid himself. That’s not okay.

Grandparents setting poor example is hard for me to deal with. I know that this is only the beginning, but it’s frustrating to enjoy my time with them, without having to micromanage their interactions. And I know that my parents were really careful when we were kids, so I’m wondering what on Earth has changed?!

How do you deal with family members saying/doing things around your kids that you don’t approve of?

In the first three days of the week I had the sum total of 14 hours of sleep. That’s about 10 hours less than normalish, and way less than the ideal. It wasn’t because Potamus has been sleeping poorly, he’s doing good despite his teething pain, it’s that I’ve felt the rise of anxiety once again. I haven’t yet figured out why I get these moments of utter stuckness in the anxiety loop. I know I begin ruminating, literally obsessing, over whatever the anxiety-trigger is, and the spiral goes on until I fall asleep from utter exhaustion.

I know what I could do and it’s not working. I’m on meds. I do relaxation exercises. I get up and walk around. I tell Boof I’m anxious. I practice yoga regularly. And the anxiety is still there. It hangs around despite the sunshine. It lingers in back alleys of my mind, smoking hand-rolled cigarettes and wearing a faded leather jacket he probably picked up at the Goodwill. And then, just as soon as it comes, it goes. I get good sleep a few more nights, and it comes back. I just can’t figure it out and I know that in trying to figure it out I’m trying to control it…to say if XYZ happens then I will do ABC and the anxiety will go away. But I haven’t figured out the magic formula, and so I wonder….

What would it be like if I just accepted that the anxiety will be there, and I don’t know when it will come or go, but my life won’t be free from it. Would that help? Or is trying to use  mindfulness once again trying to control the anxious spinning thoughts? And, if I am to just accept the anxiety, how do I go about doing it?

How do YOU handle anxious or worried thoughts?