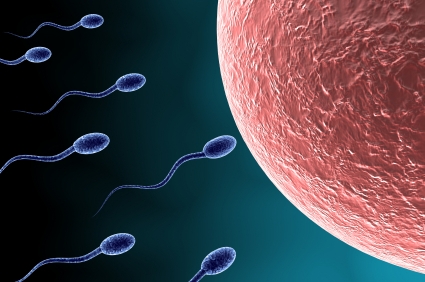 Trying to conceive is a strange experience. The more I learn about my body, the more I realize that junior high and high school health/biology class are severely lacking in the information department. Or maybe I was too busy doodling the name of my dreamy crush on my pee chee. Or both.

But seriously, it was only this week that I learned how…um…dumb (for lack of a better description) the whole getting pregnant thing really is. I mean, you have unprotected baby making sex, hopefully at the right time for the stars to align, and when you’re finished you go and get a drink of water, or take a shower or eat a sandwich. And meanwhile, if you’re the lady, there are are these microscopic swimming things just…oh you know….hanging out inside you. I mean, that’s like something from a B level Science Fiction movie…from the late 80’s.

So there they are, microscopic swimming things, who we’ve all thought of as swimming as fast as their little metaphorical hearts can go to get to the PRIZE of that glorious golden snitch bursting from the ovary. But in fact, it’s a lot less Olympics or Hunger games, and seems more like a really slow, drunken frat party. Because, according to one website’s description, the sperm (which can hang out for a few days inside, waiting…um…creepy…) just ‘bump into’ the egg and thus fertilize it.

Wait. You mean to tell me that my son was born because some sperm just randomly bumped into the egg? It wasn’t even like “oh hey baby, you’re so fine, come over here and let me fertilize you.” It was more like the egg stumbling on the way to the bathroom and being forced to marry the first dumb jock frat boy who bumps into her. Talk about fate. And kind of a dumb design if you ask me. Couldn’t they (being God, or Supreme Being, or hell, evolution) come up with a better idea than THAT?

Then again, it does seem to be working, as our Earth is teeming with human bodies.

But, all of this enlightenment about how the sperm that actually fertilizes an egg, got me thinking about the rest of the experience. Like, how sucky would it be to be trapped in the fallopian tubes for up to 3 days. It seems dark, and crowded if you ask me. And you’re surrounded by a bunch of millions of other like-minded microbes, who really just want to survive and meet that egg, but are most likely going to end up on the wrong side of Fate’s hand. And I’m not one to throw out Holocaust metaphors, but that dark, cramped fallopian tube, with millions of sperm that will eventually die, seems like those cattle cars the Nazi’s used in WWII. And I wonder, do the sperm know the chances that they will end up alive at the end of the whole ordeal? Are they blindly optimistic to the chance that they will somehow live on? So every time we have sex millions of sperm die…in my body….gross. It’s basically the Nazi regime all up in my lady parts.

Have you ever been surprised to learn something that you were supposed to have been taught in high school?