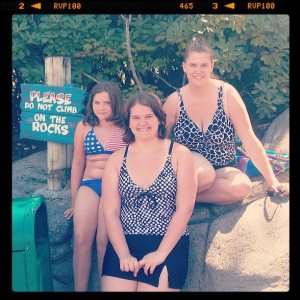 Clearly being rebellious runs in the family…

“From how you’re talking, it’s like you’re in that place, where people just run away and you don’t hear from them for like 5 years, and they’re living in the woods somewhere. Or they have a new identity, or a new family. That’s what it sounds like.“-Boof

Yeah, that’s exactly what it sounds like. It’s what it feels like. The pressure on all sides feels like it is closing in and, like a trapped coyote, I just might chew my leg off and run. Though I clarified with Boof that I had no intention of leaving him, or Potamus, that right now they are my only tiny floating safe spot in this crazy ocean of frozen emotion (think Titanic proportion ice-burgs).

The overwhelm didn’t begin yesterday, but it was certainly heightened, as I spent the afternoon with my natural family, mostly my little sisters. They were disappointed that I didn’t bring Potamus, and my biological dad seemed annoyed at some parts. I realized that I have been in reunion for 5 years, and while the times have been mostly honeymoon phase, I am starting to grow weary of having to navigate all the shifting dynamics of reunion. When I met my little sisters they were 4 and 9, now they are 10 and 14. It’s crazy. They are young women and I am getting to know them just as they are figuring out how to navigate this young-auntie role. I am both daughter, and therefore in the ‘young one’ role, but also friend, especially to my “step-mom,” as we giggled and had inside jokes that the other girls didn’t quite understand yet. I’m in this caught-between-world of adoption that feels both wonderful, as it’s a reunion I could only have dreamed of, and awful, like an after-school-special where everything seems going great until a zombie or werewolf or chainsaw murderer shows up.

The pressure I feel to be the glue to hold all of my families together is too much. The constant second-guessing that my emotions are going to cause friction or panic-stricken martyrdom and bending-over-backwards actions to try and accommodate my shifting moods.  Normals rarely get it…they talk about families with step-parents or in-laws and I just don’t think they understand…I met my family when I was 25. And not only do I navigate my own reunion, but how do I relate to my siblings reunions, too?  I now have to navigate this ridiculous amount of families, from vast different experiences…upper middle class highly educated…middle class educated…lower middle class uneducated…working class uneducated, and the vast array of political and religious beliefs, not to mention the very different life experiences that have made up each and every individual. I feel stuck in the votex of all these families and it is drowning me.

I have this runaway fantasy, where it is just Boof, Potamus and I on a desert island. Yes, I’d even leave Scrummy the dog behind. And we’d be stranded so we wouldn’t have the guilt and pressure to perform or navigate or save people’s feelings from getting hurt. We wouldn’t have to have conversations like this:

“I know you’re cousins are having their barbecue next Sunday, but I guess my biological grandma’s sister (my great-aunt) is coming to town for the last time next Sunday and we’ve been invited. I can’t say no. Can we make the timing all work?”

As I slid down the water slides with my biological family, I had all the overwhelm of nostalgia, the face-to-face of what could have been and I both liked it and wanted to puke. I compared it to my own upbringing and wondered why I’m surrounded by bigoted and racist men. Am I karmically supposed to be learning from all of this? And, if I believe in reincarnation, or life between lives, as I think I do, I wonder…if there is a lesson in all of this…am I missing the point? Will I know what the point is? Have I known these souls before? Did we actually choose this complicated story to enact for some good-to-come reason? Or, is it a punishment for some arrogance I must have had in a previous life? Why does it have to be so damn complicated?

The emotions are frozen inside and coming out in nervous tics and insomnia. My mind will not stop chattering and I’ve played approximately 768 games of bejeweled on my phone. If I were to even allow myself 5 minutes of meditation I fear I would burst into tears and never stop. In fact, I had to come out of camel pose in my last yoga class because the heart opener was just too much…I almost did cry. I just don’t know what to do, because running away is clearly not an option.