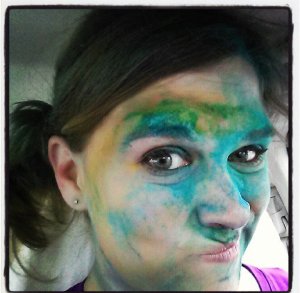 maybe it’s you that has a problem?

I don’t know if that’s a fact, but yesterday we got home from the in-law’s and I was kvetching about EVERYTHING. Seriously. I know that we’ve been doing Sunday dinner at the in-laws every week for FIVE years, and that I’ve had similar spells where I am just done with it. And then we always come back, it’s something about family that keeps sucking us back in. Sigh. So after complaining about the time of dinner (always later than intended) and the purposelessness I feel sitting around their house on Sunday (I could be doing other things! OR we could be doing other things, together, like playing games or talking or SOMETHING!), it then spiralled into complaining about my mother-in-law trying to feed Potamus Teddy Grahams at dinner, though she knows how hard we’ve been working to get him to eat things OTHER THAN COOKIES. Ugh. And the awkward interactions with Potamus by Auntie and Grandpa, it just spiralled into a ball of too-muchness that I could handle.

So we were trying to get a plan for how we want to break this annoying cycle, and I then started ranting on about my own sister and her boyfriend and complaining about the dinner we had on Saturday and it was just like…

Dude, Monk-Monk, get a grip. If this much stuff is annoying you, then it’s probably your issue, and not those other things.

Boof didn’t actually say that, it was something that I thought and then said aloud. But it’s probably a combination…annoying things PLUS my reaction to them. I’ve never been one to really hide my emotions. And I’m not easily persuaded out of a mood if I’m moody. Fortunately I haven’t actually been that annoyed with Potamus, but even Boof has been getting on my nerves. Like, for example, last Friday when we were supposed to be spending his birthday dinner at a nice restuarant, I was annoyed with him ALL DAY. Except…well…he wasn’t actually home. I had all of these imaginary annoying conversations in my head about how frustrated I was over this or that, and none of it was actually real. And yet, I was annoyed nonetheless.

I mean, I’ve thought of going back to therapy this summer, when I have a little more time, but what should I be doing NOW when it seems like everything is annoying me. Am I focusing on the wrong things? Are things really annoying? HELP!

Advice dear bloggy readers? What do you do when it seems like anyone and everyone/everything is just annoying?