I’ve been listening to a lot of Macklemore & Ryan Lewis lately. There’s just something about the lyrics of a hometown boy who’s gone platinum without the backing of any major record label. It feels so…Seattle. So Seattle. I know that everyone feels some sort of nostalgia for their hometown, but there’s something magical about this city…the rugged individualism of a pioneer spirit that still exists in this Emerald City. It’s really that Emerald City…elusive, magical, buildings that fade into trees and trees that fade into buildings.

Maybe it’s because we’re relatively the same age, but when Macklemore sings about the Mariners, in My Oh My, I get choked up. While not an overwhelming baseball fan, I remember that year. I remember later years when I sat with my grandma and chewed Double Bubble and watched the M’s play.

My oh My another victory yes, my city my city.
Childhood my life watchin’ Griffey right under those lights

In the sunshine months the city comes alive, with natives and transplants and visitors. The past few days I’ve been listening to Macklemore and driving around the city with Potamus looking for watering holes to splash in. The lyrics “My city, my city, childhood that’s right,” go through my head on repeat. 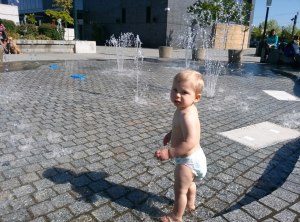 Beneath the Space Needle, in the shadow of Mt. Rainier, and a stone’s throw from the Puget Sound. I have summer memories of the Pacific Science Center and eating lunch by the fountain. Today we splashed in the fountain ourselves and I felt a part of something bigger. A connection to MY PEOPLE here. The quirky PacNwer’s who make their home in the city or carry it in their hearts when they’re far away. There’s something about this place that changes us. 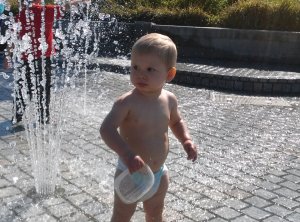 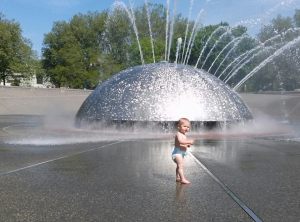 Every time somebody steps out on the road
They bring a little Northwest soul with them, amen

My city.
My childhood.
Potamus’s city.
His childhood.

It’s Good Medicine that Chief Sealth would of been proud of
This is our city, town pride, heart, blood, sweat, tears, I-5, North, South side, vibe, live, ride down these city blocks
And never will be stopped