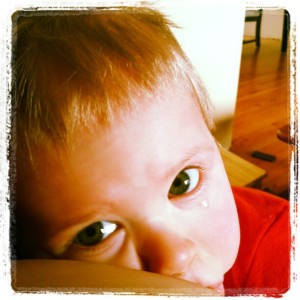 Potamus is 14 months old, and I have crossed over into the extended breastfeeding camp, surpassing my original 12 month goal. While exhausted some nights, wishing Boof could take over for all of the parenting duties, I am mostly really pleased with still following the baby-led weaning philosophy. While we’ve been weaned during the day for many months now, I have noticed this super flexibility in our breastfeeding relationship that doesn’t feel like the urgent nurse-on-demand offering from when he was small and I was worried about it going okay, and the rigorous every two hours all night nursings that accompanied the back-to-work-forced-day-weaning that happened when he reverse cycled and refused a bottle.

This flexibility has become more of a relaxed state of mind in this stage of the journey. We were day-weaned, which is what I felt comfortable with as a mom of a year-old baby/toddler. Night nursing only would involve the two of us (plus Boof), and nobody would really need to be bothered by the nursing of an older child. It kept mama happy and baby happy. He’s finally learned the art of the sippy cup, but still only drinks water and prefers yogurt over milk.

But there have been some times lately, like with Potamus not feeling well, that I offer the breast to him. It’s after I get home from work, or when he wakes up from a nap, or on my days off, when I am trying to put him down for a nap. And he has even begun to ask for it in his own way (and by ask I mean, just help himself), like when we’re in the shower together. We’re happily playing with the foam bath shapes, sticking them to the wall and he looks over at me, surveys the goods, and then dives in to boobie #1. Squatting like a little frog-man, he fully nurses and then goes back to happily playing with his toys.

What I love is those little snuggle moments. Like after his nap, when he’s rested but still sad to come back to reality from dreamland, and nestles on up to me, tears still in his eyes, and gets a little comfort. Sometimes playing with toys works, sometimes listening to some really bad 90’s music works, and sometimes he just needs a little nursing snack (as we call it), to feel grounded.

We’ve settled into this easy baby-led weaning place, and I love it. My snuggly, wiggly, big baby still needs me, and I am happy to oblige.